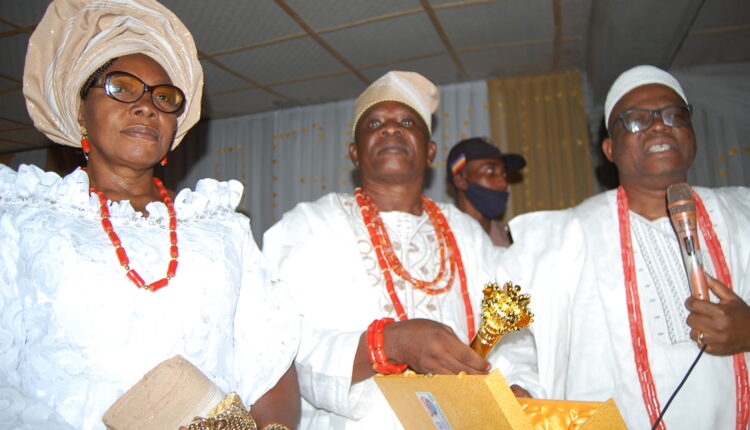 Aaje agog as Makinde, Olugbon, Onpetu, Aale, others bag awards at widowhood festival
Adebayo ADELEKE
Aaje Ologo, off Ikoyi road, Ogbomoso North local government area of Oyo state, was agog Monday (December 26) as some eminent personalities were conferred with awards of excellence for their contributions towards making life better for orphans and widows.

On December 26, the tenth anniversary of the foundation was thus celebrated at Wisdom Star Hall in his residence with fanfare featuring among others, conferment of various categories of awards as well as gifts to widows and others.

In his address High Chief Amao, who is a retired Director of SSS, while expressing gratitude to the awardees “for your consistent assistance in kind, moral and guidance over the years,” maintained, “We will remain committed to the theme of this year’s festival, which is ‘Emergence of widows, orphans, fatherless/motherless’ glory’.”

He added, “We will not relent, with support from you, our backers, until the glory of each of the vulnerable persons under our care manifest … and we believe that whatever you do will be permanently engrained in the hearts of these children and widows, you will forever be their heroes and heroines. We pray it will not be in vain – this class of people is special to the Almighty God and it will certainly be rewarded now and in eternity.”

The monarch, going down memory lane, recalled “the NGO started informally in the year 2012, and got registered with the CAC in Abuja in 2014, at a time I was still in service as State Director of SSS in Gombe state.

“I have a burden for the widows and orphans due to my nasty experience as a young boy having lost my father at a very early stage, condemning my mother – (now late) Mama Ebun Asakun Amao – to go through difficulties to fend for me. Thank God for what I am today, a product of a poor widow, who made modest achievement, to the glory of God.”

Assuring the non-governmental organization will continue helping to ameliorate the suffering of the “vulnerable people,” especially in the rural areas he disclosed that from 18 widows and orphans 10 years ago the number has soared to 265.

Onpetu commended Alaaje noting he is building a legacy for the future.
The Mogaji Olaoye ruling house of Soun dynasty of Ogbomoso, Prince Amos Olawale Olaoye, who also attended in person, affirmed Chief Amao as “the kind of Oba a community needs. He should be supported by all.”
Prophet Isaac Oni delivered the sermon and prayed for the widows and orphans, the Alaaje and all who attended the event or sent representatives.
Alaaje who had a sterling record while in the service of SSS such as heading the security apparatuses during the visits of former President Bill Clinton of the United States of America both in Nigeria and Ghana in the 2000s has also been making tremendous efforts to get a public secondary school established in Aaje community to “provide easier access to education for children in and around the community who trek long distances presently, to Ogbomoso or Ikoyi, to attend secondary school.”
He has indeed begun erection of structures on a wide expanse of land for the purpose which he hopes to donate to government.