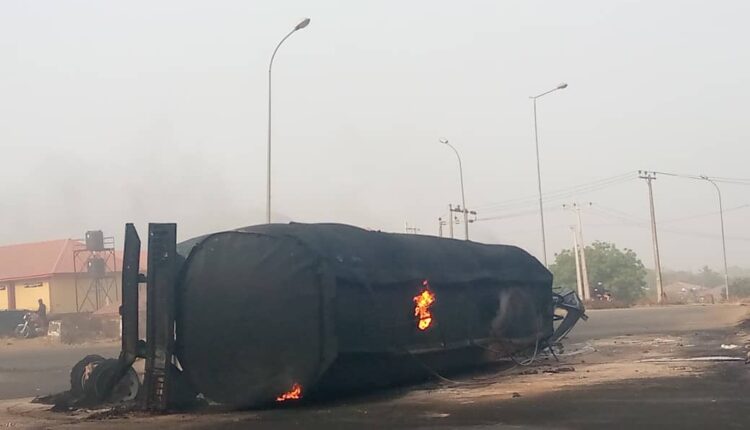 Ogbomoso tanker fire: ‘l saw one man burnt to ashes,’ eyewitness recounts
Jeremiah OYELEKE
An eyewitness who identified himself simply as Femi has recounted how the Isale-General tanker accident that resulted in fire incident in Ogbomoso Sunday evening occured confirming at least one person died.
“I saw one person burnt beyond recognition,” Femi, a truck assistant disclosed to ogbomosoinsightonline.com Monday morning. 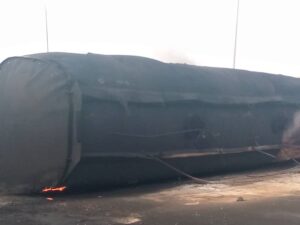 According to him, “We loaded (iron rod) at Apapa in Lagos and we were going to Sabon Gada in Niger state.
“We were having a stop over near the roundabout when we heard a screech and then the tanker loaded with premium motor spirit (petrol) fell and fuel started gushing out. 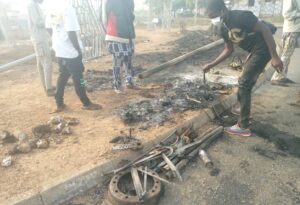 ”As the tanker fell its occupants jumped out. Not long after the fire brigade men and the police arrived. The policemen indeed tried to avert the tragedy as they made great efforts driving people scooping fuel away but they did not heed them.

“The people were even hurling insults on the law enforcement agents that it’s free gift. And so the policemen went to sit in that building (pointing).
“The population of petrol scoopers continued to increase and then some came with metal funnel. One funnel then fell on the ground and it sparked the fire. We just heard ‘gbuam’ and all hell was let loose.”
Asked how he escaped he said he fled precipitately, “it has been long l ran like that,” his boss i.e. driver of the truck he was traveling with having escaped with their vehicle too.
“But l can tell you one person was burnt beyond recognition. I saw their charred remains later. I also saw few others who suffered burns being taken away by the officers of the Federal Road Safety Commission (FRSC),” he said.
Meanwhile, a source at Owode Police station debunked the claim of casualty.