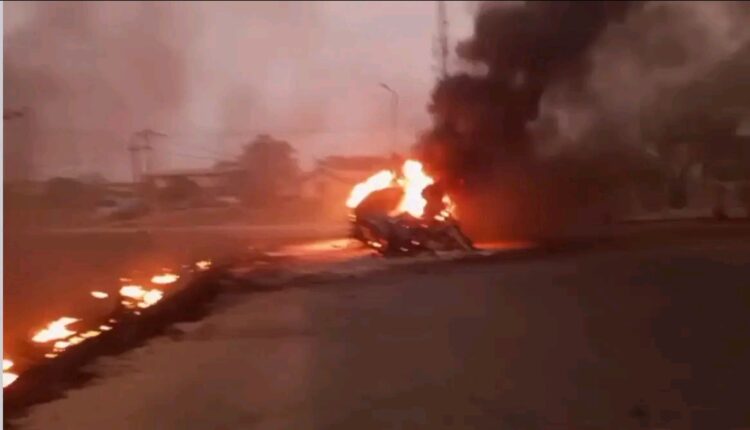 Many might have died Sunday evening in Ogbomoso Oyo state after a tanker burst into fire as people scooped fuel greedily at the scene of a lone accident.

“But l won’t pity the victims,” a passerby told ogbomosoinsightonlune.com.
“The tanker fell in the morning while trying to round up the round about linking the Ogbomoso-Ilorin expressway at Poat area,” an eyewitness who however preferred anonymity said.

“But sadly many people bombarded the scene scooping fuel. The police were there, fire brigade men were also there but the petrol had spilt all over in many directions and l was sure the place would be gutted in fire.

“If you see how people trooped there with jerry cans to scoop petrol you would know it was disaster waiting to happen.”

It was learnt that the nearby Wazo Market was soaked in petrol with “greedy people having a field day, you don’t need a soothsayer to tell you fire outbreak would occur,” another eyewitness recalled.

“There was even an okada (commercial motorcyclist) operator carrying a passenger who parked to scoop fuel into his motorcycle while the passenger waited.”

The disaster eventually happened consuming several people whose number is yet to be ascertained.

“Smoke engulfed the whole place, a very thick smoke, many must have died,”another eyewitness who identified himself simply as Mr. T. informed.
It is reminiscent of the 1991 kerosene tanker explosion at Ahoyaya in 1991 in which hundreds of people died and many scarred with fire.

The ongoing fuel scarcity in the country which has lasted over two months did not help the matter,

ogbomosoinsightonline.com can confirm as many saw the “outpouring of premium motor spirit (petrol) into different channels in the area as manna from heaven. But it has turned into a disaster.”